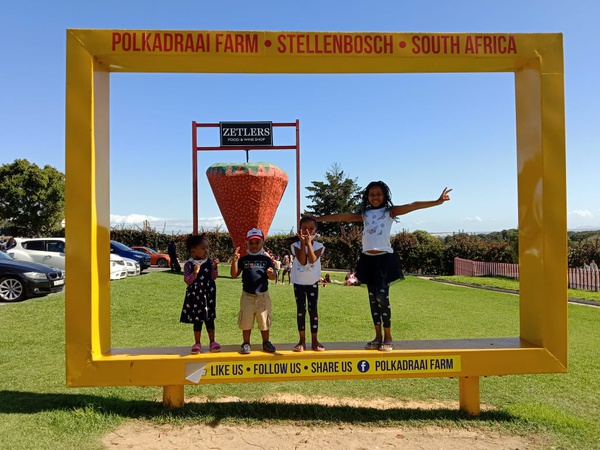 The Polkadraai Strawberry Farm is located approximately 30 minutes away from Cape Town. It can be reached on either the N2 or N1 of the National Roads. The Polkadraai strawberry farm offers strawberry picking, tractor rides, mini golf, pony rides plus light bites and a food/wine shop. We specifically went to pick strawberries because of the weather, in the morning it was drizzling and it was not promising that it was going to be a good day until later in the afternoon and by that time the farm was going to close in an hour and thirty minutes.

There were five adults and four kids. We got to the farm, paid for our containers where we would be putting our strawberries in and were granted entry. I thought after we finished paying we would immediately see where we would be going to pick the strawberries but we had to walk for a good 2km to get to the designated strawberry picking location. The walk up was a laborious one as we were going up a steep heel, the sun was shining directly on us and because we arrived late we had to go pick the strawberries from the far end of the field because many people had already been there to do the picking. Our spirits were still high and we were still highly enthusiastic. We finally got to the top and started looking for the strawberries.

We were now running out of time as they were announcing that they would close soon so we had to quickly wrap things up. We made a promise to ourselves and to the kids that we would definitely come back for them to explore the other activities that they have to offer at the farm while we would be enjoying the wine and the restaurant that they have.

We got home and the kiddies wanted a strawberry smoothie, can you guess what the adults wanted?? Yes, you guessed right with that alcoholic strawberry daiquiri. At the end of the day everyone was delighted with the experience and we spent the remainder of the day enjoying the fruits of our hard labour.