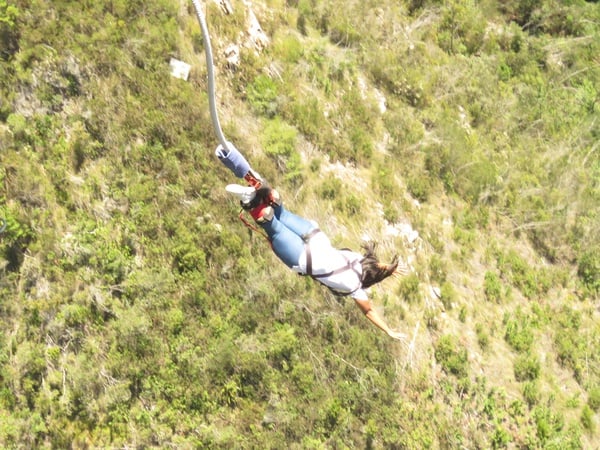 Imagine the highest bungee jump in the world. With that also imagine deciding to do that bungee jump to close of the year in style. Yes, that was me, I did that and got the t-shirt. I am acting brave now because I have conquered it, however, let me not omit the fact that I had sweaty palms, my heart rate was that of a person on a race track and I kept on looking to see how far we are from the bottom.

The Face Adrenalin Bloukrans Bungee is the world highest bungee jump, situated in the Western Cape in Tsitsikamma. The bungee takes place from the top of the arch of Africa’s biggest bridge, it stands at a height of 216m above the Bloukrans River with a length of 451m.

I recall how I was still at Varsity and every beginning and end of the school term I would be going home from the Western Cape to the Eastern Cape where the bus I was taking would pass by that bridge and I would always be fascinated by how beautiful it is and the length of it. At the time I never thought that a few years later I would be standing on the arch of that bridge, ready to take the biggest jump of my life.

I remember shortly after Christmas my sister and I decided to go and do the jump, Tsitsikamma is situated roughly 300km from Port Elizabeth which is my hometown, an estimated 3-4 hour drive. When we spoke about it and decided to go ahead with our plans two days later, I got on the phone, called the place to inquire about the prices and times, booked our session and it was all systems go from then.

Upon arriving, we paid, waited for our group to gather together as we would walk to the bridge where the jump would take place, at this time the adrenaline has kicked in but you still do not know how to feel as you have not seen where and what you will be doing, however, when walking on the bridge, you can hear the cars driving on top of you, you get to experience the bridge in its entirety as you get to see it all the way to the bottom, from both sides and it’s not just a 30 seconds experience of the bus passing by, you see it and feel the air as you are walking in it for a good 15 minutes.

We finally got to the top of the bridge, got strapped up and we had numbers written on the back of our hand so they would call the number and you would know that it’s your turn to go. They called my number and I began feeling dizzy, strapped me up and I had to hop to the edge of the bridge. The music was playing loudly with cheers from the staff, they told me they would give me a countdown and I would have to jump. Just thinking about the experience makes my heart rate go up and I get excited. Well, when standing on the arch of the bridge you cannot help but look down even though it is advisable not to, I did that and got more scared. However, after my countdown, I JUMPED… Screaming my lungs out in the air, I could even hear the echo of my voice as I was screaming for my life. For a good 2-3 minutes, I was just hanging upside down trying to take it all in before the roped me up again. I got to witness my beautiful surroundings and admire mother nature. At the bottom of the bridge, there is a beautiful river-like looking water streaming to the other side. You hear the birds chirping and are surrounded by the forest. The guys pull you up to the top of the bridge while you are still going through all the emotions of finally doing the jump.

The fulfilling thing about the jump is the fact that they take pictures of every moment from the time you jump to the time they rope you up and come to collect you. I am not scared of heights so it was never about getting rid of a certain fear, however, doing the jump will go down as one of the biggest most rewarding risks I have ever taken in my life. Someone asked me if I would do it again? I honestly do not think so, however, if I were to do it in a different country or with a different company I would most certainly do it just for the memories.

Going back to my bucket list to tick off, highest bungee jump in the world…. BECAUSE ‘SIS’ did that!!!!!!.