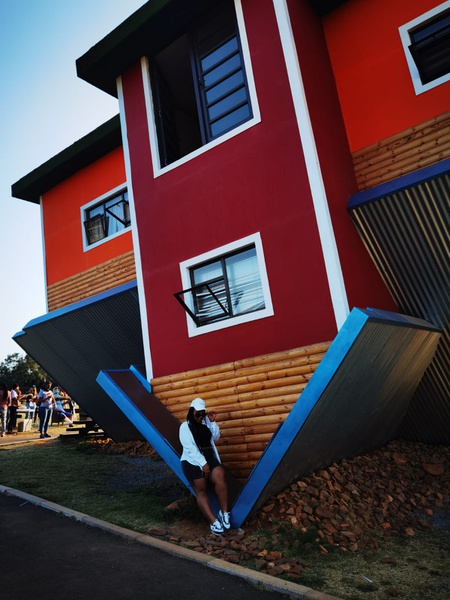 What constitutes a great day? Well for me it definitely is spending time with my friends, whom I have not seen in a long time due to lockdown, and also doing fun activities that my son can also part-take in. This past weekend exceeded my expectations in a way that I could not have imagined, leaving me happy and fulfilled. The fact that we were celebrating my younger sister’s birthday and also doing it in a place where she has always wanted to visit was the cherry on top for me.

There is a saying that goes ‘Everything we hear is an opinion, not a fact. Everything we see is a perspective, not the truth.’ Well in this case it was different, everything we heard was a fact and everything, and we saw was the truth. The upside-down house is something that exists, we saw it, we touched it, and we experienced it in the best way possible. Located near Hartbeespoort in the North West Province, which is about 75km north of Johannesburg, there lies a bright colored house facing upside down in a big field.

It was a beautiful day with my friends, sister, niece, and son. We told the kids about the outing a day before we went and showed them the pictures of where we would be going. The morning of the outing, that was the only thing that they spoke about. They could not wait for us to leave the house. The drive to the place was also an interesting one because we also wanted to see this house, we were worried about the drive is a bit long for the kids but I guess the excitement from both the adults and the kids was too much to contain to the point where it felt like a short one.

Upon arriving we saw the house even before we parked the car, I could see the adults now becoming the kids with the excitement that could not be contained any longer. We could not wait to get out of the car and when we eventually did and started walking into the place, there was a long queue. We were disappointed that we would have to wait for such a long time to get in but that did not put our spirits down as we had our own fun in that line by taking pictures and making jokes. The line went by faster than anticipated and we paid for our tickets and went in. Upon entering we got the shock of our lives when there was another queue in the field where the house is situated to go inside the house. It was demotivating and the excitement was starting to die down because it was also a sunny day so we were feeling hot. At this point, I was worried about the kids and how bored they would get with standing in the long queue, however as we approached the house there was entertainment for the kids which was a relief for me. While the ladies were still standing in the queue, my friend and I took the kids to the playground area where they had the jumping castle to play in and coin-operated kiddies rides which the kids enjoyed a lot.

We went back to check on the ladies and to our surprise, they were closer to entering the house. We tried to analyze the outside of the house with anticipation of how it looked inside. We tried to figure out how it was built and I was starting to question if the house was really stable enough to hold everyone in it and if it would not fall with us on the inside. We finally got our turn to go inside and it was the biggest mind-blowing situation to happen that day. I felt slightly faint upon entering as if the room was spinning. My friend on the other hand only went to two rooms of the house and she had had enough, she was nauseous and feeling faint. The kids were enjoying every minute of it while we were busy trying to figure ourselves out.

The two-story house consists of three bedrooms, a lounge, a dining room, a kitchen, and a bathroom. The roof is on the ground and the floor is in the air, the furniture is in the air. You would swear that we were defying gravity somehow, perspective played an important role inside that house as you would get mentally disturbed if your mind cannot comprehend what is happening.

After the upside-down house, we went to catch a meal at the takeaway restaurant situated inside the field where the house is. The kids were happy which is what the ultimate goal was for me. My sister was also happy that she eventually went to experience the upside-down house. I would definitely recommend it to anyone who has come to visit South Africa or Gauteng Province.

After taking the kids home, we did what many people would do when it's their birthday... We partied and partied!!!

N.B. I would advise to visit the upside-down house early in the day or during the week to get the most out of the place as it becomes packed on weekends or in the afternoon.